YEREVAN. - President of Armenia Serzh Sargsyan on Wednesday received co-rapporteurs of the Parliamentary Assembly of the Council of Europe (PACE) Monitoring Committee for Armenia, Alan Meale and Giuseppe Galati.

The President underscored the importance of the periodic meetings held parallel with the fact-finding mission, which, according to him, provide an opportunity to refer to the reforms in Armenia, results recorded in the given period, as well as listen to the assessment and impartial viewpoint of people, who are well aware of the European system of values.

The President highly appreciated the role of the co-rapporteurs in the monitoring of reforms implemented in Armenia, expressing gratitude for the work carried out.

The co-rapporteurs, for their part, expressed satisfaction with the fact that the progress in the direction of establishing parliamentary democracy in Armenia is reached quite fast and consistently, although, according to them, there are still certain problems to be solved.

They also underscored the significant role of President Sargsyan in advancing the democratic processes in Armenia in this period. The co-rapporteurs invited the President—on behalf of the Council of Europe (CoE)—to visit the organization and speak about Armenia in PACE.

Sargsyan thanked for the invitation, stressing that it is a good opportunity for presenting from high tribune the work carried out in Armenia and the exiting issue.

At the meeting, the interlocutors also referred to the upcoming parliamentary elections, work carried out in the direction of aligning the legislation after the amendments to the Armenian Constitution and development of cooperation with the CoE. In this context, he also attached importance to the launch of actions of the new CoE project.

Furthermore, the President and the co-rapporteurs exchanged views on the Nagorno-Karabakh conflict settlement process. 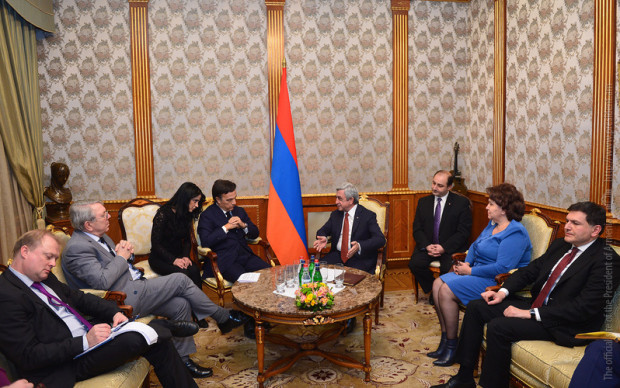