0
16:42Annual scholarship for young Armenian talents 11:20Ameriabank as a Promoter of Armenian Culture: Launch of “An Armenian Odyssey: The Color of Pomegranates” Festival 9:13Ameriabank Receives Two IFC Awards for Achievements in Trade-Finance Sector 12:59“Khachaturian Trio” is preparing for a large-scale tour: Karen Shahgaldyan 13:59Get a credit card with a limit of up to AMD 5 million by Unibank 13:18all.me in spotlight at Blockchain and Digital Assets Session at WCIT 2019 18:05all.me ready to assist in increasing transit potential of Eurasian Economic Union 18:03Russian First Deputy PM: Information regarding goods on territory of Eurasian Union should be stored on single resource 11:55all.me | Tickets for WCIT 2019 available on meMarket with 25% discount 17:50all.me digital platform becomes WCIT 2019 Special Partner 17:17The first Armenian International Photo Fest opened in Yerevan supported by Tovmasyan Charity Foundation 16:03Yerevan hosts the presentation of Canadian Institute’s (YEDI) Start-Up programs (video) 16:57ANIF announces the appointment of Dominique de Villepin to its Board of Directors. 14:37OFID and Ameriabank strengthen trade and development in Armenia 15:39Intentional distortion of the Constitution is a very dangerous step. I think that the CC members should decide on stopping Vahe Grigoryan's powers. Gor Hovhannisyan 16:23Ara Sargsyan. desire to keep pace with best international practices is in our dna 11:312 nd youth entrepreneurship conference launched in Yerevan 10:02რუსი სახელგანთქმული გოგონები ძუძუმწოვრებით სემენოვიჩთან შედარებით. მიიღეთ გულმკერდის: "ცხელი" ვარსკვლავები დიდი ბიუსტი 16:20The project "Days of Maltese Music in Armenia" is another step towards strengthening the friendship between the Armenians and the Maltese 9:57Three Armenian Banks Finance Significant Investment Deal of Armenian Company
5 April, 2017 18:01 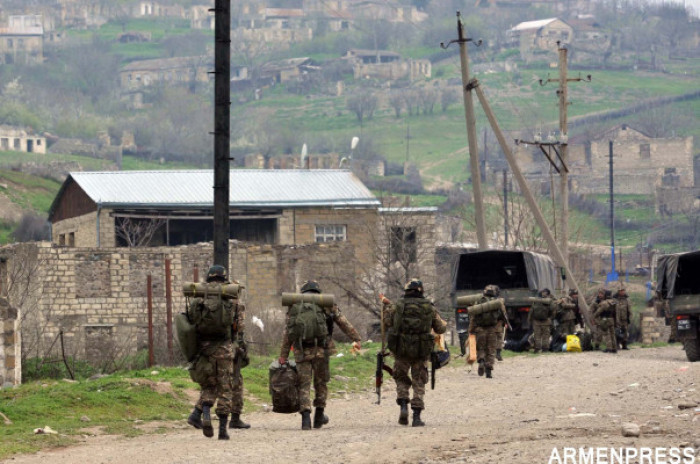 Today marks exactly one year since the end of military aggression unleashed by Azerbaijan against Artsakh with a view to resolving the Azerbaijani-Karabakh conflict by force. On the night of 1 to 2 April 2016, in flagrant violation of the ceasefire, the Azerbaijani armed forces launched a large-scale offensive along the entire border using heavy equipment, artillery and aviation. Only after suffering heavy losses in manpower and military equipment, on 5 April 2016, Azerbaijan was forced to ask for a cessation of hostilities with the mediation of Russia.

The April aggression of Azerbaijan against Artsakh, which was accompanied by numerous violations of international humanitarian law and war crimes, has become a serious challenge to regional peace and security and has caused great damage to the negotiation process for the settlement of the Azerbaijani-Karabakh conflict within the framework of the mediation efforts of the OSCE Minsk Group Co-Chairs.

During the year that has passed since the end of the hostilities on 5 April 2016, the Co-chairs of the OSCE Minsk Group have been making efforts to ensure conditions for a full restoration of the negotiation process.

The Republic of Artsakh has been consistently supporting the statements of the OSCE Minsk Group Co-Chairs on the need for the full implementation of the ceasefire agreement of 12 May 1994, practical application of the provisions of the agreement of 6 February 1995 on strengthening the ceasefire regime, as well as implementation of the agreements reached in Vienna (16 May 2016) and in St. Petersburg (20 June, 2016) on introduction of a mechanism for investigating incidents and increasing the capacity of the Personal Representative of the OSCE Chairperson-in-Office.

Azerbaijan not only rejects these proposals, but also disrupts any initiative aimed at excluding the possibility of resumption of hostilities. Moreover, throughout this time Azerbaijan has been sparing no effort to transfer the logic of confrontation to the spheres of economy, culture and even human contacts.

While demonstrating complete unwillingness to reach a negotiated peace settlement, the Azerbaijani authorities threaten to unleash another war. By consistently increasing the tension on the Line of Contact between the armed forces of Artsakh and Azerbaijan and continuing the policy of confrontation and hostility. Baku deliberately deepens the mistrust between the parties and tries to make the process of peaceful settlement of the Azerbaijani-Karabakh conflict a hostage of its destructive policy and maximalist demands.