0
16:42Annual scholarship for young Armenian talents 11:20Ameriabank as a Promoter of Armenian Culture: Launch of “An Armenian Odyssey: The Color of Pomegranates” Festival 9:13Ameriabank Receives Two IFC Awards for Achievements in Trade-Finance Sector 12:59“Khachaturian Trio” is preparing for a large-scale tour: Karen Shahgaldyan 13:59Get a credit card with a limit of up to AMD 5 million by Unibank 13:18all.me in spotlight at Blockchain and Digital Assets Session at WCIT 2019 18:05all.me ready to assist in increasing transit potential of Eurasian Economic Union 18:03Russian First Deputy PM: Information regarding goods on territory of Eurasian Union should be stored on single resource 11:55all.me | Tickets for WCIT 2019 available on meMarket with 25% discount 17:50all.me digital platform becomes WCIT 2019 Special Partner 17:17The first Armenian International Photo Fest opened in Yerevan supported by Tovmasyan Charity Foundation 16:03Yerevan hosts the presentation of Canadian Institute’s (YEDI) Start-Up programs (video) 16:57ANIF announces the appointment of Dominique de Villepin to its Board of Directors. 14:37OFID and Ameriabank strengthen trade and development in Armenia 15:39Intentional distortion of the Constitution is a very dangerous step. I think that the CC members should decide on stopping Vahe Grigoryan's powers. Gor Hovhannisyan 16:23Ara Sargsyan. desire to keep pace with best international practices is in our dna 11:312 nd youth entrepreneurship conference launched in Yerevan 10:02რუსი სახელგანთქმული გოგონები ძუძუმწოვრებით სემენოვიჩთან შედარებით. მიიღეთ გულმკერდის: "ცხელი" ვარსკვლავები დიდი ბიუსტი 16:20The project "Days of Maltese Music in Armenia" is another step towards strengthening the friendship between the Armenians and the Maltese 9:57Three Armenian Banks Finance Significant Investment Deal of Armenian Company
27 July, 2017 17:08 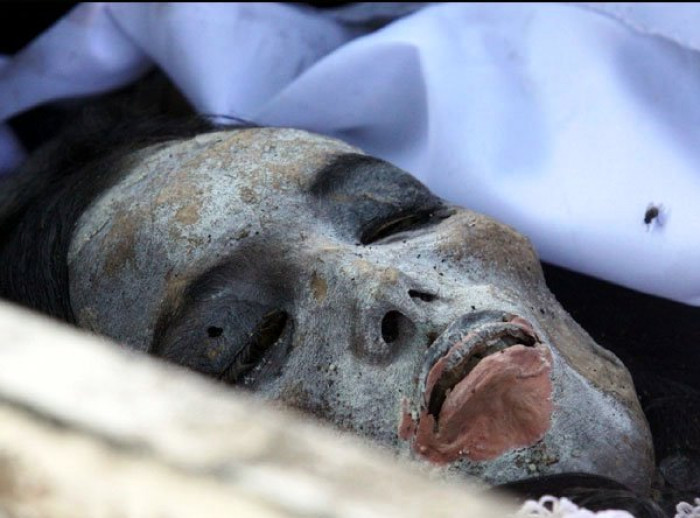 Due to the sensitive nature of the photograph, INQUIRER.net has opted to downplay the image showing the remains of actress Claudia Zobel. For our readers who want to view the full picture click the thumbnail.)

CEBU CITY, Philippines — When her coffin was opened, relatives of Claudia Zobel, the Cebuana bold star who died in a car crash in 1984, were stunned.

Her face and body appeared almost intact after her remains were exhumed from the Queen City Memorial Gardens in Cebu City.

Relatives of the then 18-year-old celebrity — Thelma Maloloy-on in real life — were expecting to find only human bones 29 years after she was buried.

Similar cases have been reported in the cemetery, where saltwater sometimes seeps into underground tombs, preserving the human remains like a mummy.

Her elder brother Ernesto Maloloy-on said the family had wanted to transfer her skeletal remains and have them buried with their late father.

An air-tight casket can produce that effect, said Renan Cimafranca, chief of the Department of Health Regional Epidemiology and Surveillance Unit.

“When the casket is properly sealed, only a small volume of air can enter resulting in lesser pathogens or bacteria that slows the decomposition of the body,” he said.

“When the body is exposed to extreme heat, there is less moisture and the body dries up,” he added.