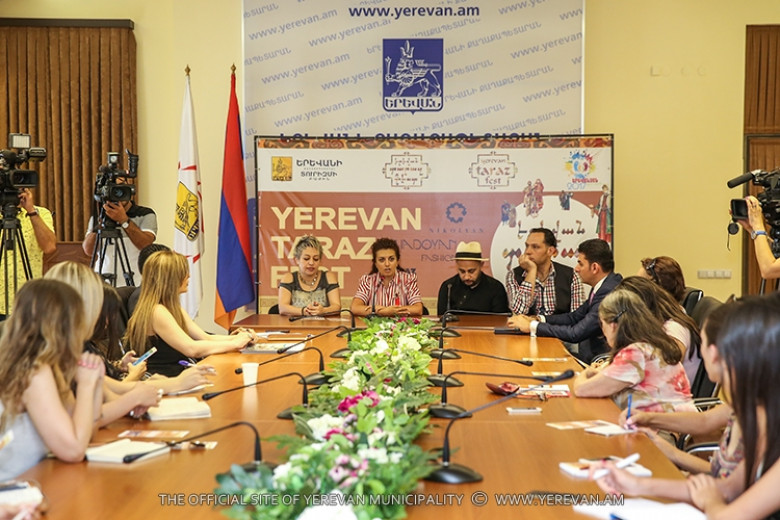 Within the frames of “Yerevan summer” three=month event program “Yerevan TARAZfest” festival has been held for the 3rd time. This year it is held in northern avenue in Yerevan.
The details of the festival were presented during the press-conference by Yerevan Mayor’s Assistant Maria Baraghamyan, by the director of “Teryan” cultural center, designer Lilit Melikyan, by designer Aram Nikolyan, as well as by designer Gevorg Shadoyan participating in the fest for the first time.
According to Yerevan Mayor’s Assistant Maria Baraghamyan, from year to year “Yerevan TARAZfest” is attracting more and more tourists to the capital benefitting to the development of event tourism in Yerevan.
“This festival is one of the three festivals of “Yerevan summer” program the main aim of which is to develop event tourism in Yerevan. We wish to turn Yerevan into a tourism platform presenting the diverse and rich cultural heritage of the capital. We attach importance to the fact that this year the cultural communities of other nations as well as diplomatic missions accredited in Armenia are taking part in “Yerevan TARAZfest”, as representatives of different nations live and create side by side in Yerevan”, said Maria Baraghamyan.
This year “Yerevan TARAZfest” implemented by the tourism unit will consist of two parts: the exhibition-fair and fashion show.
“This idea draws a lot of interest both among designers and tourists. During this year’s festival I will present my collection “King of kings” which was only presented in closed show, and it is a fine platform to present it for wide circles of public. The festival is a good opportunity to present modern folk masters and their works”, said designer Lilit Melikyan.
“Last year the festival was held in Artsakh and it was very successful. I wish “Yerevan TARAZfest” to become a touring festival which will certainly contribute to the popularization of the festival and making Yerevan more recognizable among other cities as a city of tourist and cultural interest. During the festival I am going to present my “Ayntap” collection”, said Aram Nikolyan.

“It is not the first time I have got the invitation to take part in the festival, but I couldn’t do it because of travels. This year I have been finally lucky to participate and I am happy to present my old and new collections. This collection in which the past and the present, the ornaments and colours are combined is called “Renaissance”, said designer Gevorg Shadoyan.
This year for the first time in the festival are participating the embassies of Kuwait, Belarus and Kazakhstan in Armenia, the Union of Poles of Armenia “Polonia”, the German cultural NGO “Teutonia”, the Federation of Ukrainians of Armenia with the shows of their national outfit. The Puppet Gallery, “PreGomesh” Armenian Jewellry company, “Shadoyan” fashion house and “Armenian brands” platform will take part in the festival for the first time too.
Like the previous years, the festival united “Teryan” cultural center, “Megeryan carpet” company, Yerevan History Museum, “Armenian Doll” company, “Kenats toun” cultural NGO, “Anahit Simonyan fashion” , individual embroidery masters and others.
Due to “Marashlean photo atelier” and “Taraz and Art” photo-lab” all the participants will have the opportunity to take photos in national costumes or in Taraz environment.
The second part of the fest will present individual shows of national costumes and outfits including elements of miniature art by Lilit Melikyan, Aram Nikolyan and Gevorg Shadoyan. The collection will be shown by the models of “Atex” fashion center.
“Yerevan TARAZfest” will take place on August 5, from 18:00 till 22:00 in Northern avenue, Yerevan.