BREAKING
11:52 Newspaper: Armenia authorities “get to work” 9:28 How does marijuana affect vision? 15:51 Armenia to have trade attaché in Iran 11:45 1,014 new cases of COVID-19 confirmed in Armenia 10:51 Sugar from beans and meat may be effective against brain cancer, research claims 9:48 Armenia Ombudsman to forward to Police a letter regarding threats to journalist and her child 14:41 Lukashenko offers Aliyev help in restoring occupied territories of Artsakh 13:45 Armenia PM: I told Russia President we want ceasefire on condition of returning Azerbaijan territories in 5+2 format 12:14 1,075 new cases of COVID-19 confirmed in Armenia 13:19 Search for fallen soldiers’ remains continues in Artsakh 16:05 One dollar exceeds AMD 537 mark in Armenia 11:11 1,231 new cases of COVID-19 confirmed in Armenia 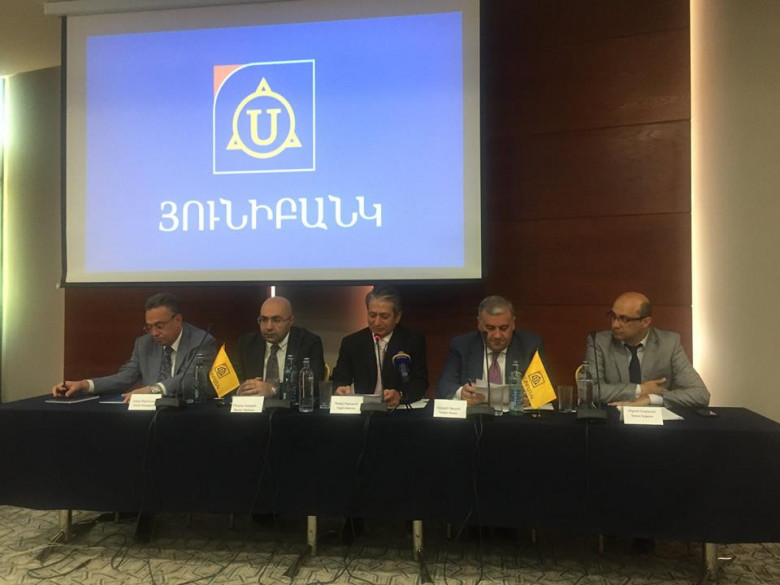 Today, on June 20, the annual general meeting of “Unibank” OJSC shareholders took place, where the results of the bank’s work during 2017 were summed up and further plans were presented. During the reporting year the bank’s assets have increased by approximately 9,5 % becoming AMD 202.7 billion, while the liabilities have exceeded the number of AMD 167,4 billion increasing by 11%. The total capital of the bank has been more than AMD 35,4 billion. The volume of the bank’s loans has grown by 14% becoming more than AMD 135 billion.

A great work has been carried out at Unibank in 2017 in regards to the improvement of the service quality and the services provided. As a result, Unibank has had a leading role in retail market providing more than 1 000 loans daily. Today, the bank has 360 000 clients and 173 shareholders.

“During the reporting year, Unibank has provided a high rate of growth in all the main spheres of its activity. The improvement of the risk management system, portfolio diversification and extension of loan volumes has made the record index of Unibank’s assets possible. The improvement of the bank’s assets has also been evaluated by Moody’s agency, the latter having raised Unibank’s rating up to B2 level by stable forecasting. Today, the bank has 360 000 clients and 173 shareholders who consider Unibank a trustworthy and reliable partner,” mentioned Gagik Zakaryan, Unibank Board Chairman.

Unibank has continued its active growth in 2018 as well and has over-fulfilled the business plan. In the first trimester, Unibank has made a profit of more than AMD 472 million, which will essentially contribute to the rise of the bank’s investment attractiveness.

“In the frameworks of the bank’s development strategies, we are planning to make a profit of about AMD 4 billion in 2020. Тhe market share of the bank’s retail loans will be up to 13%, POS loans- up to 40%, corporative loans- up to 10%. We are also planning a rise in the quantity of banking cards making it more than 100 000 from 80 000”, said Mesrop Hakobyan, CEO of Unibank.

“As you know, there was a change in the bank’s Management in 2017 and Mesrop Hakobyan took responsibilities of CEO, while Vardan Atayan accepted our offer to continue his work in the Board. Artem Konstandyan, the new Board Member of Unibank, also has a great banking experience. We are sure, that Unibank will actively continue its development as a client-oriented and innovative bank owing to the team work. We are grateful to our shareholders and clients for their trust and loyalty, and to the bank’s staff for their team-work, as well. Also, special thanks to the Central Bank and to the Union of Banks of Armenia, for their support,” supped up Gagik Zakaryan.

What is likelihood of getting COVID-19 again in healthy young people?

Armenia to have trade attaché in Iran

Unibank is the leader in the number of POS loans

Scientists find hot spots in brain that may indicate cancer

Fatty foods may be good for men, study claims

1st signs of skin cancer: What are symptoms of dangerous disease?

Who in Armenia will be vaccinated with AstraZeneca, Sputnik V vaccines against COVID-19?

What do you need to eat after being vaccinated against COVID-19?

European Champion Samvel Gasparyan: I dedicate my victory to our heroes who died in Artsakh

Is it harmful to eat after 6 pm?

Artsakh MFA: Tragic events in Maragha will remain an incurable wound in memory of our people

Why is it good to drink cocoa when stressed?

What side effect experience over 80% of patients with Moderna vaccine?

Armenia MOD officials spent the night in their offices

75% of children with severe complications from COVID-19 were asymptomatic

One dollar exceeds AMD 537 mark in Armenia
All Timeline »
Most Popular
1 New approach could be effective in treating Alzheimer's disease 2 726 new cases of COVID-19 confirmed in Armenia 3 Unibank is the leader in the number of POS loans 4 Bafta Film Awards 2021 announces first winners 5 What is likelihood of getting COVID-19 again in healthy young people?
Poll