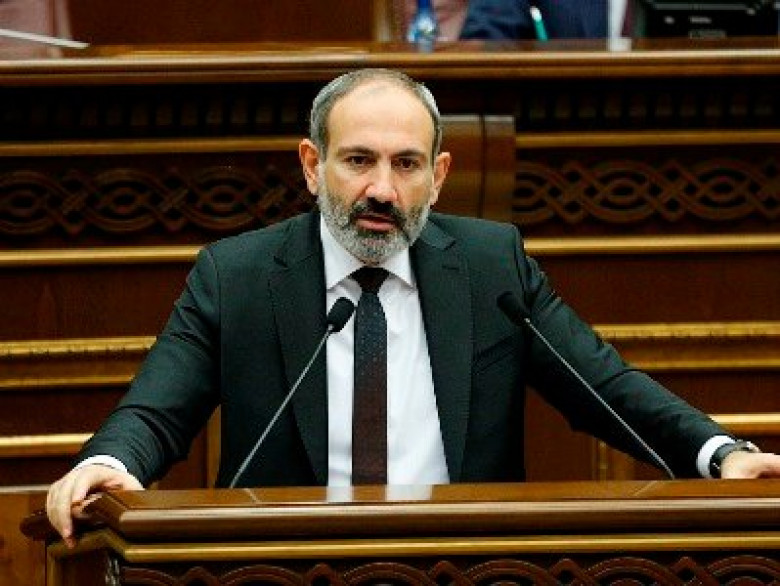 YEREVAN. – Analyzing the situation, consulting with the President of Artsakh [(Nagorno-Karabakh)], the General Staff of the Armed Forces, I decided that we must reach a ceasefire through certain—yes, also heavy—concessions. Prime Minister Nikol Pashinyan on Wednesday stated this at the National Assembly of the Republic of Armenia (RA) while presenting the report on the implementation and results of the government program for 2020, referring to the developments that took place before and after October 19, 2020.

"In this connection, I convened a sitting of the Security Council, which was also attended by representatives of parliamentary forces. The opposition also took part in the sitting, to whom I said that I had invited [them] not to share accountability with them, but to inform them because at that moment I could not make a public statement about what was happening because if suddenly the other side did not accept our proposal, those statements would not have a positive effect on the general situation. The RA President and the Catholicos [of All Armenians] also took part in the sitting of the Security Council.

On the same day, I invited the representatives of the extra-parliamentary opposition, and informed [them] about the situation.

After that, according to the arrangement, I called the Russian President and said that we want a ceasefire on the condition of returning the territories of Azerbaijan in the 5+2 format—a condition that has previously been proposed to Armenia by the mediators in the most various formats. We had a detailed discussion with Putin, and we achieved a common understanding and stated that we formulate or have a common formulation for overcoming the situation in the same way with the Russian president," Pashinyan said.

He emphasized that there was a question of the return of refugees, and the return of Azerbaijani internally displaced persons to Nagorno-Karabakh. "I have said that we have no objection to this issue and will not have if we somehow connect the issue with the process of clarifying the status of Nagorno-Karabakh. After that, the Russian President had a [telephone] conversation with [Azerbaijani president] Aliyev, as a result of which it became clear that Azerbaijan categorically does not accept the demand for the de-occupation of the Hadrut region. Second, it demands that the issue of the return of internally displaced persons be in no way connected with the clarification of the status of Nagorno-Karabakh. There is also a new detail, about which I have not said before; also, there was also an implication that there should not be a return of territories with the 5+2 formula, but there should be a return of seven territories," the Armenian PM added.

Pashinyan said that both before and during the war, Azerbaijan did not accept the agenda of clarifying the status of Nagorno-Karabakh. "This was, pay attention, the main reason for the 4-day war in April 2016 and the 44-day war in 2020,” he said.

The Armenian premier recalled that his statement made in the National Assembly on September 27, 2020, where he informed that Armenia was posited a condition to concede at least the security zone without any preconditions, without any status adjustment.

"We [the incumbent Armenian authorities] have inherited the settlement of the Nagorno-Karabakh conflict in a deadlock, pre-war, and post-war situation. What grounds do I have to say such a thing? This is proved by the two statements made by [ex-President] Serzh Sargsyan during the election of the Prime Minister on April 17, 2018. That day in the National Assembly Serzh Sargsyan said: ‘The negotiation process does not inspire optimism; to be more precise, that process is simply stalled. It is stalled because Azerbaijan's expectations from the outcome of those talks are unrealistic, unacceptable for us.’

On the same day, Serzh Sargsyan said: ‘First of all, I must say that the April war was both a surprise and not a surprise because in many cases, people are convinced of something, but inside they cherish hope that the adversary or the partner will be guided by sound logic and will not take steps that are harmful to both sides as well. In this regard, we should consider the first lesson that we should never hope—at least for a very long time—that the Azerbaijani leadership will abandon its trustless approaches, will abandon its desire to resolve the Nagorno-Karabakh conflict by force,"’ Pashinyan said, adding that back 2017, there was a situation where Armenia had reached—and even crossed—its “red lines.”