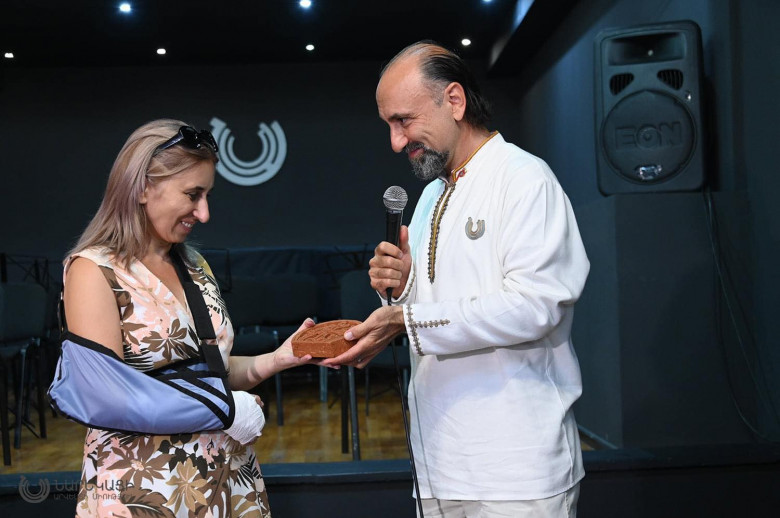 The event started with the Lord's Prayer by Father Zgon Abrahamyan, the pastor of Erebuni community of the Ararat Patriarchal Diocese.
The concert part of the event was opened by Naregatsi Orchestra (Artistic Director, RA Honorary Artist Artem Khachatur).

Speeches were delivered by RA Honorary Worker of Art Daniel Yerazhisht, Nubar Folk Ensemble Artistic Director Lusine Nazaryan, RA Honorary Worker of Culture Gagik Ginosyan, Founder of Naregatsi Art Institute Nareg Hartounian.
"It is very difficult for me to make a speech today. Only a few days ago we were to celebrate the 15th anniversary of the Shoushi branch of the Naregatsi Art Institute, but regardless of these tragedies, we must continue our mission with God's blessing," said Nareg Hartounian.
At the end of the event, Nareg Hartounian handed over a symbolic gift Nubar Folk Ensemble, led by Artistic Director Lusine Nazaryan.

Naregatsi Art Institute has a tradition, according to which we give the title of "Ambassador of Armenian Culture" to artists who have greatly contributed to culture. "For this title, we also have a symbolic gift - a small khachkar, on which is engraved the logo of the Naregatsi Art Institute, that is, faith and art are united," said Nareg Hartounian.