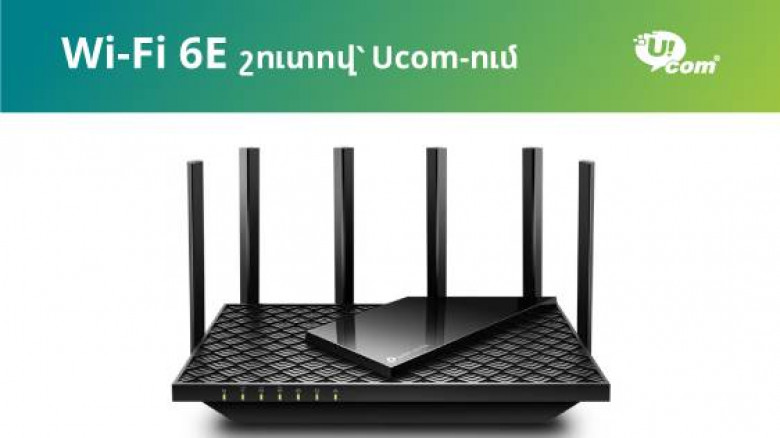 During the press conference held on November 11, 2022 Ara Khachatryan, Director General at Ucom, presented the Wi-Fi 6E routers to be exploited in the future network. Last year, during the launch of Unity tariff packages, the Company announced that for the first time that Ucom’s subscribers have the opportunity to benefit from a new generation Super Wi-Fi 6 device throughout Armenia, where Ucom's fixed network is available. Unlike its predecessor and the most widely used Wi-Fi 4 devices on the market, Wi-Fi 6 provides 4 times faster bandwidth and up to 16 times higher speed, allowing Ucom subscribers to enjoy home internet at the speed of up to 400 Mbps/sec also via Wi-Fi. Moreover, the Wi-Fi 6 device is provided free of charge.

The presented state-of-the-art Wi-Fi 6E equipment is the latest Wi-Fi Alliance wireless network standard. Its main feature is that unlike currently available Wi-Fi 6 routers, which operate simultaneously in the 2.4 GHz and 5 GHz bands, Wi-Fi 6E devices can also operate in the 6 GHz band.

“Simply put, the higher the frequency, the more data can be transmitted with lower latency. If you are in the immediate vicinity of the router, it will be possible to transfer and receive large amounts of data with the minimum delay and in the shortest time possible," explained Ara Khachatryan, Director General at Ucom.

Let's add that as of today, the use of frequencies in the 6 GHz range is officially allowed in very few countries. However, the latest Wi-Fi 6E technology will allow, in particular, to significantly improve the quality of online games, video streaming and the experience of subscribers in wireless networks, even if several devices are connected to the same network at the same time.