0
21:59Electronic tips: Idram and IDBank continue developing the customer’s digital experience 16:39Ucom offers buying any gadget without prepayment 16:36"I am in debt but to my homeland." Artak Tovmasyan. "Past" 14:09Artak Tovmasyan and his team of IT specialists introduced necessary steps for the further development of Armenia 19:44No cash: new campaign of Idram and IDBank against cash 14:47IDsalary and IDsalary+. You choose from where to receive your salary 12:26Ucom and “Vega” introduce a special offer 17:55Two Fiat 500 cars from IDBank and Idram 18:56Ucom Offers Cameras, Smartphones and Movies to Celebrate Love 22:04Tovmasyan Foundation President: My political team is working on development programs 16:09Unibank's data center switches to green energy 20:04The director general at UCOM summarized the passing year 14:57Faster internet and 191 tv channels to all Ucom fixed service subscribers 16:34Unibank increased interest rate on deposit up to 10.25% 15:20AN OPEN LETTER TO THE CO-CHAIRMEN OF THE MINSK GROUP 17:27UCOM expands the free access list of educational websites 15:42Armenians around the world unite to protest Turkey and Azerbaijan 16:51PRESS RELEASE: ECR Party Criticises Arrests in Armenia 14:15The “Single Window” System developed by Armenian company IUnetworks was implemented in Tajikistan 17:31Unibank issued USD bonds with 5.25% annual yield
1 March, 2017 20:25 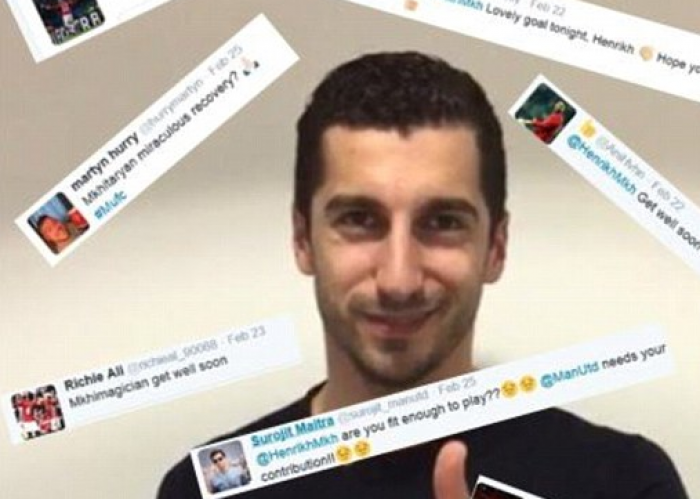 The attacking midfielder is recovering from a hamstring injury suffered against St Etienne in the Europa League.

He was forced to come off and subsequently missed out on United's triumph in the EFL Cup final against Southampton.

Mkhitaryan said: “Your get well messages are really helping me with my recovery! Thank U.'

He posted a picture of himself with a thumbs up, decorated with a number of messages from fans.

One read: “I love you, I miss you.” Another said: Get well soon man, the football world needs you!”

The 28-year-old got off to a slow start to his Old Trafford career but has gradually grown in influence for Jose Mourinho.

He has become one of the Portuguese's most dangerous attacking threats with an eye for goal and Mourinho will hope to see his man back in action sooner rather than later.

United take on Bournemouth at home in their next encounter though it remains to be seen whether the Armenian will be fit in time.