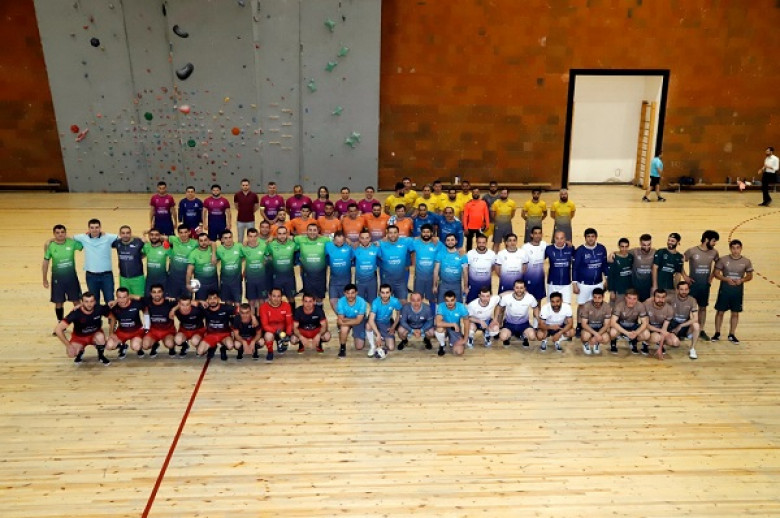 A healthy lifestyle and team spirit are the best manifestation of unity, and team sports are one of the best examples of corporate citizenship. Guided by the principle of promoting a healthy lifestyle of the community, Galaxy Group of Companies organised a futsal tournament—Galaxy Champions League 2021 and 8 teams of the companies that are part of Group participated in it. Games, which lasted for about one month were between 80 competitors of Megafood, TI’ME, Yerevan Mall, Kinopark, Santafe, Ucom-1, Ucom-2 teams, and UCOM-1 team was recognised the winner of 2021.

“I would like to congratulate Ucom-1 team on becoming the winner of futsal tournament of Galaxy Champions League 2021. I am sure that the team spirit, fair play and healthy competition are also seen in the day-to-day work of the team where each of us struggle through our minor roles to implement large-scale programs for improving lives and communities”, said Co-Founder and CEO of Galaxy Group of Companies, Aram Khachatryan.

In the final of the Champions League of one of the top employers of Armenia, Galaxy Group of Companies, Ucom-1 team achieved a hard-won victory over the Galaxy team by a score of 3-2 and in the match for the third place Ucom-2 defeated Megafood by a score of 5-2. The list of scorers was headed by Megafood football player Misak Simonyan by 9 goals and the best goalkeeper was Mihran Babayan from Ucom-1. 16 football matches took place during the tournament, football players scored 100 goals, received 40 yellow and 4 red cards.

“In the heated football matches of this difficult period we were filled with a lot of energy and motivation and the futsal tournament became a small holiday for us”, said CEO of TI’ME, captain of TI’ME team, Arsen Mnatsakanyan.

“Galaxy Champions League was a wonderful opportunity to promote the values of a healthy lifestyle and corporate culture”, CEO of Chronograph, captain of Galaxy team, Gabriel Avetisyan noted.

It is worth to mention that during the games the fan-clubs showed enthusiastic support for their teams from the crowded tribune.

“Galaxy Champions League was a great opportunity to encourage the sports activity of Galaxy employees’ community for ensuring the internal communication between the employees and for the community development.  By futsal tournament we contribute to the establishment of the principles of healthy competition in our community", added head of the organizing committee of the Galaxy Champions League, Armen Khachikyan.

It is noteworthy that as one of the top employers of Armenia, Galaxy Group of Companies implements various social and corporate citizenship projects for its community development, as well as social programs for the elders and children with the participation of employees, and educational initiatives with the involvement of the executives of the Group, promotes arts and classical music by providing invitations to all the employees of the Group for the concert season of the Armenian State Symphony Orchestra. Community development programs in the Group also include staff exchanges, internships, and personal development dimension.

Galaxy Group of Companies founded by Aram Khachatryan, Gurgen Khachatryan and Artyom Khachatryan is an Armenian holding company which represents 15 companies in 3 countries. A large part of the company’s turnover is aimed at implementation of social responsibility programs in Armenia, in the fields of education, social development and arts for the development of Armenia.