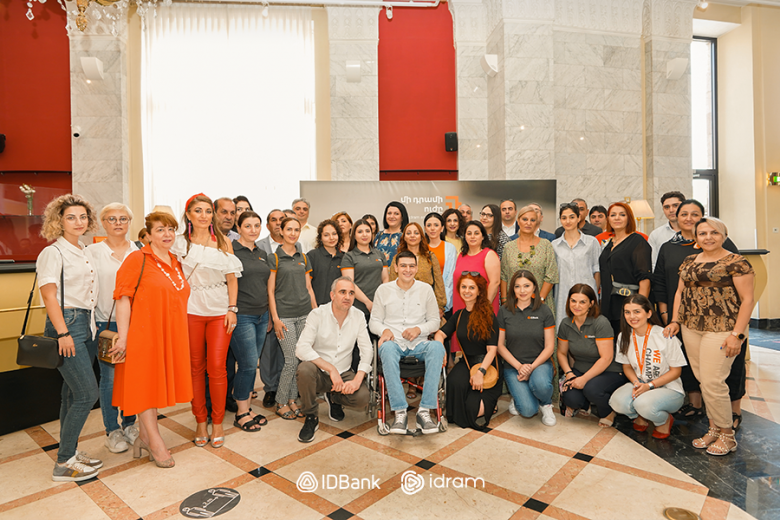 For a year now, IDBank and Idram have been donating 1 AMD to the initiative for each payment made through the Idram&IDBank application, terminals and web platforms of the companies. During this time, 5 funds became the beneficiaries of the “Power of One Dram”, over 27 million drams were transferred to them. The beneficiary of the latest program of the initiative was the VIVA Foundation - Doctors and Volunteers for Armenia, which received 8.648.000 AMD.

There were two charitable events at the Armenia Marriott Hotel: IDBank transferred AMD 1 million to the joint initiative "Weave for..." of the Insurance Foundation for Servicemen and the company "Megerian Carpet", and the next beneficiary of the "Power of One Dram" was announced.

As part of the donation, employees of the Bank and Idram added 1000 nodes to “Arevagorg” - the SunRug. By the way, IDBank is the first company to join the initiative, giving the opportunity to “weave kindness” not only to its employees, but also to the beneficiaries of the “Power of One Dram” initiative. The event was attended by the director of the VIVA fund Tatyana Hovhannisyan, the beneficiary of the Soldier's House and the Insurance Foundation for Servicemen, a war veteran, a first-degree invalid Henrik Nikoghosyan, as well as other friends of the initiative.

According to the Chairman of the Board of the Bank Mher Abrahamyan, the “Power of One Dram” was the best initiative of 2020. “We started at a very difficult time, and I am especially encouraged by the reaction of our clients when they purposefully make payments through the Idram&IDBank application or our other platforms in order to donate more money to one recipient or another, monitoring the amount of their personal investments within the framework of the initiative”, mentioned Mher Abrahamyan and added, that the Bank continues to come up with other initiatives, a prime example of which is knitting Arevagorg. "We have joined the program with great enthusiasm, we hope that our example will become contagious for other organizations, let them join in teams so that we can finish knitting the carpet as soon as possible and help the defenders of our Motherland”, said the Chairman of the Management Board of IDBank.

Deputy Director of the Insurance Foundation for Servicemen Tatevik Yagjyan noted that such events are very important, as they provide an opportunity to support our soldiers and make their future safer.

Idram Director Arsen Kdenyan was pleased to note that more and more clients prefer to make payments through the Idram&IDBank application. “Thanks to our clients, every month we transfer a bigger amount to the beneficiaries of the “Power of One Dram” program. As you know, this year we have transferred over AMD 27 million, and I assure you that the growth trend is not slowing down․ “Thanks to our goodwill ambassadors, we will accomplish many more important things, as it all starts with one dram and one node”, mentioned Arsen Kdenyan.

According to Tatiana Hovhannisyan, Director of the VIVA Charitable Foundation, the “Power of One Dram” initiative is a vivid example of socially responsible business. “I don’t know of any other similar project in Armenia, when people would direct their budget to charity, and not to advertising. This is not the first fund to be helped by IDBank and Idram. For the amount transferred to us within three months, the prosthetist from Armenia will go to Germany for training, and then will work in the Soldier's House. It turns out that even within the framework of one program, the “Power of One Dram” helps several organizations at the same time, which solve vital problems for Armenia, and this is great”, mentioned Tatiana Hovhannisyan.

Everyone can weave kindness: keep making payments through the Idram&IDBank app and become a goodwill ambassador for the “Power of One Dram” initiative. And if you pay for weaving Arevagorg through the Idram QR-code placed in the “Marriott” Hotel, you will become a part of two good deeds at once.

Everything starts from one dram and one node.