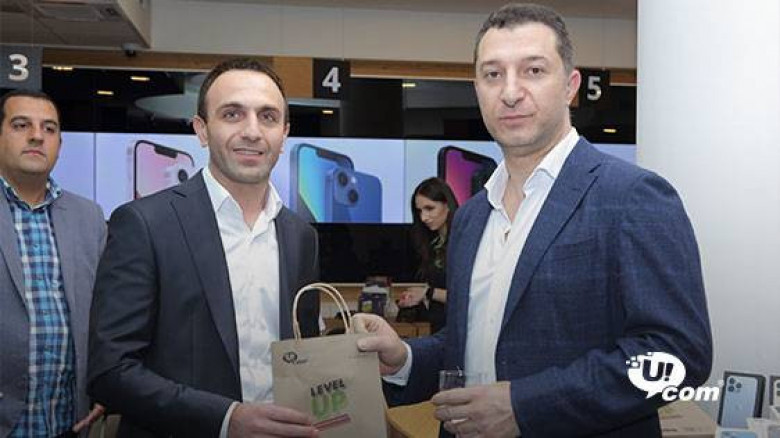 On October 14, 2021, at 11:30 PM, in Ucom’s service center located at Northern Avenue 1/2, an event announcing the kick-off of the official sales of Apple’s iPhone 13 smartphones took place. The guests of the event were the buyers who pre-registered for purchasing the long-awaited gadgets. As an official partner of Apple, among the other worldwide companies, Ucom paid a special attention to those who chose the prominent brand.

“We are happy that as an official partner of Apple, we are one of the first companies that represents this latest smartphone to the Armenian costumers. To kick-off sales we have invited the pre-registered buyers and prepared special surprises for them,” mentioned Arina Arustamyan, the Commercial Director at Ucom.

The pre-registered buyers, in particular, have received special promo codes valid until December 31, 2021, enabling to get a 50% discount when buying phone numbers for 600.000 AMD, 1.000.000 AMD and 2.000.000 AMD at Ucom’s online shop. Moreover, during the event the buyers also had an opportunity to coat their new iPhones for free.

Let us note, that the new iPhones are equipped with more powerful batteries: Apple promised to add the time of battery use by 1.5-2 hours. With regard to iPhone 13 Pro versions, the stunning, redesigned Retina display in them features ProMotion, a new technology that delivers refresh rates of up to 120Hz for fluid scrolling, greater responsiveness and smoother motion content.

“I have purchased iPhone 13 for my grandson: tomorrow is his 24th birthday anniversary. We, all his relatives, have decided to surprise him with such a gift,” one of Ucom’s costumers shared her impressions from the purchase.

Let us add, that iPhone 13 is presented at Ucom in graphite, gold, blue, red, starlight, pink and other shades. Smartphones can be purchased both in cash and by credit.