0
16:42Annual scholarship for young Armenian talents 11:20Ameriabank as a Promoter of Armenian Culture: Launch of “An Armenian Odyssey: The Color of Pomegranates” Festival 9:13Ameriabank Receives Two IFC Awards for Achievements in Trade-Finance Sector 12:59“Khachaturian Trio” is preparing for a large-scale tour: Karen Shahgaldyan 13:59Get a credit card with a limit of up to AMD 5 million by Unibank 13:18all.me in spotlight at Blockchain and Digital Assets Session at WCIT 2019 18:05all.me ready to assist in increasing transit potential of Eurasian Economic Union 18:03Russian First Deputy PM: Information regarding goods on territory of Eurasian Union should be stored on single resource 11:55all.me | Tickets for WCIT 2019 available on meMarket with 25% discount 17:50all.me digital platform becomes WCIT 2019 Special Partner 17:17The first Armenian International Photo Fest opened in Yerevan supported by Tovmasyan Charity Foundation 16:03Yerevan hosts the presentation of Canadian Institute’s (YEDI) Start-Up programs (video) 16:57ANIF announces the appointment of Dominique de Villepin to its Board of Directors. 14:37OFID and Ameriabank strengthen trade and development in Armenia 15:39Intentional distortion of the Constitution is a very dangerous step. I think that the CC members should decide on stopping Vahe Grigoryan's powers. Gor Hovhannisyan 16:23Ara Sargsyan. desire to keep pace with best international practices is in our dna 11:312 nd youth entrepreneurship conference launched in Yerevan 10:02რუსი სახელგანთქმული გოგონები ძუძუმწოვრებით სემენოვიჩთან შედარებით. მიიღეთ გულმკერდის: "ცხელი" ვარსკვლავები დიდი ბიუსტი 16:20The project "Days of Maltese Music in Armenia" is another step towards strengthening the friendship between the Armenians and the Maltese 9:57Three Armenian Banks Finance Significant Investment Deal of Armenian Company
25 November, 2016 17:07 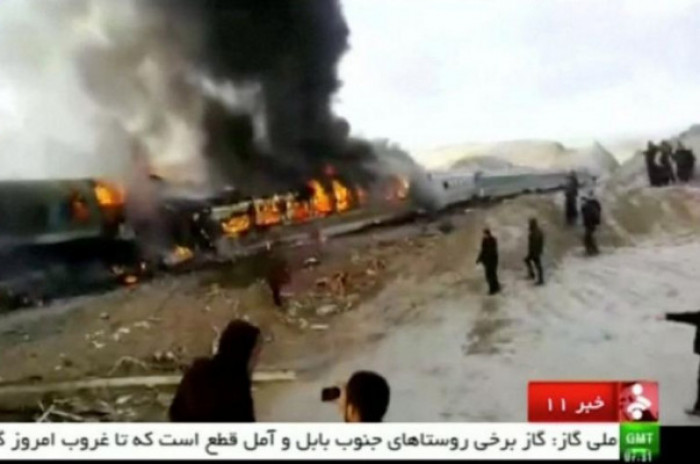 "At least 15 people were killed and over 20 others have been injured in the crash," the semi-official Mehr news agency quoted head of Iran's Red Crescent Ali Asghar Ahmadi as saying.

Iranian media gave contradictory reports on the death toll and number of injured passengers in the crash. The semi-official Fars news agency said 52 people were injured, who were transferred to nearby hospitals.

Reports gave no details on the number of passengers in the trains. But Fars said 100 passengers had been rescued.

State television showed footage of four derailed carriages, with two of them on fire. A spokesman for Iran's Red Crescent, Mostafa Mortazavi, told Fars that firefighters were trying to control the blaze.

"The accident happened when a passenger train in motion crashed to another one that had stopped at the station," it said.

The cause of the collision was under investigation, it said, adding that rescue teams have been dispatched to the site of accident.

"We can have a better idea about number of casualties after the fire is put out," Ahmadi said, Mehr reported.

The crash occurred at the Haft-Khan station in the city of Shahroud, about 400 kilometers (250 miles) east of Tehran.

A local official told state TV that the remote location of the train station had slowed down rescue efforts.

"So far only one helicopter has reached the scene because of access difficulties," said local head of the Red Crescent Hasan Shokrollahi.