0
15:20AN OPEN LETTER TO THE CO-CHAIRMEN OF THE MINSK GROUP 17:27UCOM expands the free access list of educational websites 15:42Armenians around the world unite to protest Turkey and Azerbaijan 16:51PRESS RELEASE: ECR Party Criticises Arrests in Armenia 14:15The “Single Window” System developed by Armenian company IUnetworks was implemented in Tajikistan 17:31Unibank issued USD bonds with 5.25% annual yield 21:079th Annual Regional HR Conference. “HR: THE NEW NORMAL” 16:42Annual scholarship for young Armenian talents 11:20Ameriabank as a Promoter of Armenian Culture: Launch of “An Armenian Odyssey: The Color of Pomegranates” Festival 9:13Ameriabank Receives Two IFC Awards for Achievements in Trade-Finance Sector 12:59“Khachaturian Trio” is preparing for a large-scale tour: Karen Shahgaldyan 13:59Get a credit card with a limit of up to AMD 5 million by Unibank 13:18all.me in spotlight at Blockchain and Digital Assets Session at WCIT 2019 18:05all.me ready to assist in increasing transit potential of Eurasian Economic Union 18:03Russian First Deputy PM: Information regarding goods on territory of Eurasian Union should be stored on single resource 11:55all.me | Tickets for WCIT 2019 available on meMarket with 25% discount 17:50all.me digital platform becomes WCIT 2019 Special Partner 17:17The first Armenian International Photo Fest opened in Yerevan supported by Tovmasyan Charity Foundation 16:03Yerevan hosts the presentation of Canadian Institute’s (YEDI) Start-Up programs (video) 16:57ANIF announces the appointment of Dominique de Villepin to its Board of Directors.
25 June, 2019 15:39

Intentional distortion of the Constitution is a very dangerous step. I think that the CC members should decide on stopping Vahe Grigoryan's powers. Gor Hovhannisyan 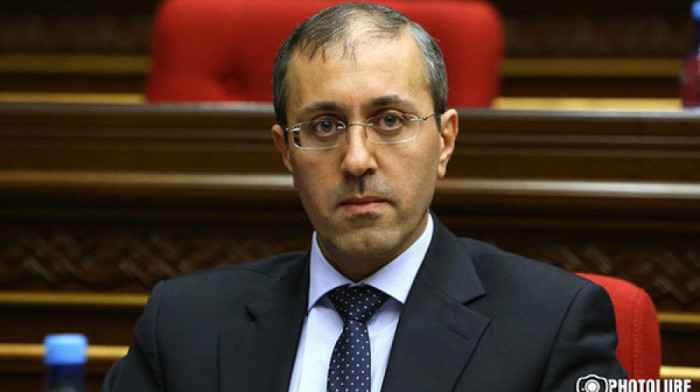 In the field of law, the dilettante has reached dangerous levels and has already entered the Constitutional Court. Dr. Gor Hovhannisyan, associate professor of German and European Constitutional and Administrative Law, as well as Associate Professor at the Department of International Law at the Hagen University, Associate Professor of the Police and Security Administration at the Berlin Institute of Economics and Law, held an interview with Tert.am. He recalled that Vahe Grigoryan, a Constitutional Court judge, had raised attention in the year before the President of the Republic of Armenia, claiming that the process would be held through a public and transparent competition, but when the President nominated his candidacy, he was no longer anxious. He questioned Vahe Grigoryan's professional abilities after the official statement, that he will assume the powers of the CC Chairman.

- It was legitimate for RA President Armen Sargsyan to nominate Vahe Grigoryan a member of the Constitutional Court or did not have the right to nominate him for the second time.

- My opinion has already been repeatedly stated. I can only add that I refused my candidacy for the next two terms. Besides, Vahe Grigoryan himself raised attention against the practice of nominating a nominee by the President a year ago, demanding that the process take place through a public and transparent competition. But when the President proposed his nomination without announcing a contest, he did not complain of the practice and did not give up his candidacy. In fact, it was unacceptable for him to nominate another candidate without the competition, and to nominate his candidacy without a competition is also acceptable. This is a very unscrupulous approach. The other unprotectedness is to apply to the President of the Republic three times with a request to nominate his own candidacy, which he thinks he is still illegitimate. At last, he has declared an unprincipled approach that he does not pertain to the position of the CC judge, but has applied three times to nominate him. Such an unprincipled person cannot be a CC judge. Besides, he has a clear political affinity for the ruling party. It is indisputable that he is not politically neutral, so he is not satisfied with the claim to the Constitutional Court. One can also recall the talk of the NSS and the SIS chiefs regarding his political approach. Therefore, there were many obstacles concerning his nomination, which was ignored by the President of Armenia.

- Vahe Grigoryan, a member of the Constitutional Court, stated in his speech that he is assuming the duties of CC President. Do you consider his justifications as constitutional or legal? Is it a legal dispute or distortion of law by Vahe Grigoryan?

- What is said above is, in fact, a serious suspicion of its highly professional preparedness with a distorted interpretation of the Constitution's norms. To be honest, I am ashamed to seriously consider this issue because it is a highly primitive interpretation. But on the other hand, the law-enforcing dimension has reached dangerous levels and has already entered the Constitutional Court. It must be countered, otherwise the consequences can be devastating for the country. Many adequate lawyers have already expressed their disagreement over such misstatements of the Constitution, even in the light of the principles of jurisprudence, to comment on the issue in detail, the need for which would not have been. However, when the constitutional norms are primitive interpreted by the CC judge, it is already a very serious threat to the country's constitutionality and should be avoided at once.
I will only add the following to my colleagues' opinions: In terms of interpretation, two aspects must be distinguished: whether the interpretation of the norm is true and whether this interpretation is mandatory.
The interpretation of the conventions can also be true or false, which is understandable because law is science, like any other science, and has its own laws and principles on which the results of that science are measured. The fact that jurisprudence is a science of interpretation does not at all mean you can do any foolish claims and make a comment. The comment also has rules and criteria that measure the interpretation results in terms of their right or wrong. Otherwise, it would not be possible to evaluate the law students' examinations at the university, for in the case of the most rational solution of the legal problem, the author could argue that it is his understanding of the norm and the end. Any solution would be right. It is clear that it is not so. Law students are also dismissed because they are wrongly solving the problem, for example, due to incorrect or at least unacceptable interpretation of the applicable law.

- There is an opinion that Vahe Grigoryan simply interprets the Constitution and the sample.

As you can see, it is not possible to comment on the constitutional norms of any interpretive interpretation in any other sense than I have presented, but it is also impossible to amend Article 213 (1) in the Constitution. Consequently, Vahe Grigoryan's interpretation is wrong and distorts not only the current Constitution, but also all the jurisprudence.

- Is the current situation is possible in Armenia: to create a judicial and not a constitutional crisis.

- Certainly not, because, as we have seen, no one's comment is constrained. How to understand the provisions of the current Constitution, only the Constitutional Court can decide for all of us with compulsory force. As long as the CC does not comment on these rules, others' comments will remain purely private. The same applies to my point of view here.

- As a constitutional lawyer, how do you picture the solution of this issue?