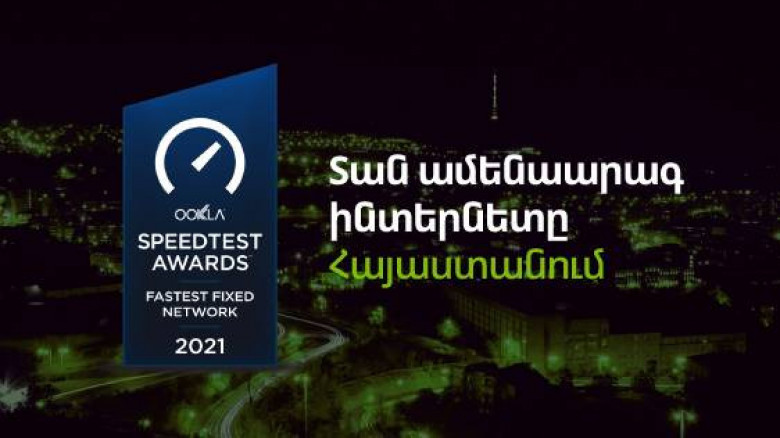 Ookla, the the global leader in internet testing and analysis has awarded Ucom with “The Fastest Fixedline Network in Armenia 2021” award based on analysis by Ookla® of Speedtest Intelligence® data Q1-Q2 2021.

Ookla® has collected and analyzed the results of thousands of consumer-initiated tests using Speedtest for fixed internet users across Armenia.

“Speedtest Awards, presented by Ookla, are reserved for an elite delegation of network operators that have delivered exceptional internet performance and coverage within a market. It is our pleasure to present Ucom with the award for Fastest Fixed Network in Armenia. This recognition is testament to their exceptional performance in Q1-Q2 2021 based on Ookla's rigorous analysis of consumer-initiated tests taken with Speedtest", said Doug Suttles, CEO at Ookla.

“Well, in 2017, Ucom was absolutely justly awarded by Ookla®, an international independent company, as the fastest mobile operator in Armenia right after we’ve deployed our 4G+/LTE Advanced network. And now I am glad it’s again Ucom to receive the Speedtest Award™, this time being not only the fastest fixed network operator, but also the first company in Armenia to receive such an accolade”, noted Ara Khachatryan, Director General at Ucom.

Ookla’s methodology ensures accuracy of the data and reduces bias from things like repeated testing or those attempting to skew the results. The company also uses a variety of other methods to prevent fraudulent or inaccurate results.

For a given location, the company aims to include only fixed networks that provide service for a significant number of customers in a specific geographic area. So, while one provider might be fastest in a particular city or region, they may not be suitable to be included in the fastest provider nationwide because they only serve a very small portion of that country. To be included in a given geographic area, a fixed network must meet a minimum threshold based on the number of unique devices testing each day over a six month period.

“This award is one of the greatest achievements of my team’s 24/7 dedicated work. At the same time, we acknowledge that being the fastest fixed network operator in Armenia is really very binding, because every day our subscribers get even more demanding, so we have to preserve the pace and deliver even better, near-perfect speed to each and every customer, "said Vahram Ilbekyants, Technical Director at Ucom.